Tsubaki Miki, who belongs to our company, participated in “FIS SNOWBOARD SNOWBOARD WORLDCUP SCUOL” held in SCUOL (Switzerland) on January 9, 2021.

・ 50 people from all over the world entered this race.

With a good time in the 36 seconds range, she advanced to the second run in 6th place on the red course.

【Final】
・ The final is a tournament system in which the player who finishes early wins, not the time.

The first match of the final (best 16) is Claudia Riegler (Austria), a veteran alpine snowboarder who is 30 years older than Tsubaki.
Tsubaki unfortunately lost by 0.42 seconds, resulting in 11th place. 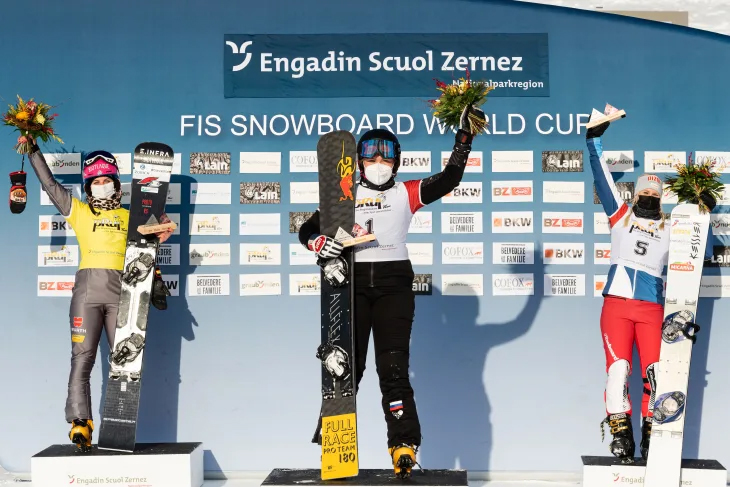 I was surprised that Sophia (Russia), who is the same age as Tsubaki, won the championship in this tournament following the World Junior Championships.
The qualifying also passed the 1st place, and all the final tournaments chose the red course and won.
I realized once again that it is very important for Tsubaki to take the lead in qualifying and choose a course that gives her dominant position.
In order to achieve Tsubaki’s goal of “winning the World Cup Best 8 or higher three times” this season, it may be the key to be in the 8th place in the qualifying!
Alpine snowboarding where both time (qualifying) and strength (final) are important.
The more I knew it, the more interesting it became.

Let’s all support Tsubaki, who has grown up to be a representative player in Japan and Asia!